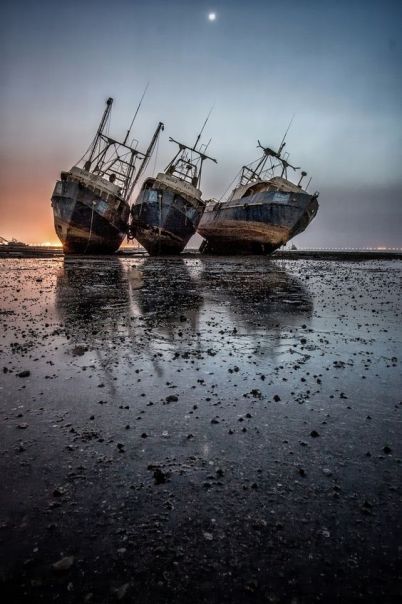 The night brought a storm, unlike any other. The sailors of the three ships, every one of them, prayed to whatever they prayed to as they were tossed back and forth. Too many were tossed overboard by the heaving waves, men and women becoming one with the sea waters. The three captains could not spare the time to worry about any one person: they had hundreds to try to save, but it was the three ships that were their lives and it was the ships they cared for most of all.

They knew it was their fault, for setting onto the unsettled waters that night. Warned, the three ignored the then possible danger for the chances presented to them. A win is what they needed, badly, and so caution was forgotten for what could be. They paid for their single-mindedness, more than any of them thought was due.

“You ask that question every single time, and the answer is always the same, kiddo. Greed, and ego, make people do some very stupid things.”

“My teacher says ‘stupid’ isn’t a good word to say.”

“That, in itself, is… sigh… never mind. People do stupid things. Ok?”

The waves rocked up and dove down, pockets of watery walls that closed in on the three ships. Two were hit head-on, while the other crushed inwards. The screech of the metals mixed with the roar of the storm, drowning out the wails of the sailors. That it didn’t go under, then, was a miracle that no one noticed. The other ships were being battered senseless at the same time. The ocean rose and took control.

When dawn came, it was hidden by the still raging storm. There was no breaking in the skies, but only upon the roiling waters. Any left alive noticed nothing more than the buffeting, the pain, the need for it all to be over. One captain was already gone, not surviving the crushing, and one other had lost any cognizant capability. Others tied that captain to a chair on the bridge and left. That captain’s eyes glazed with dark waters.

“Why don’t YOU tell me? You know the story.”

The third captain pushed on. There was no other way except to give up and accept what the sea and the storm demanded. This captain was seen in every part of the ship, urging, threatening, working alongside the crew. They threw themselves into a new fervor of working to save themselves and the captains’ ship. There was nothing to be done beyond their drenched space to keep going.

Finally, nature settled. From pure rage to utter stillness, the three ships were still afloat. Weak shouts went up across the bows. The sea moved the ships together, grouped in a battered trio of wounds. The sun blazed down, no clouds obscuring the burning heat.

From still day to night, the seas propelled the ships. Most on board were unable to process what was happening: none of the equipment worked, most of the crew injured, in one way or another. During the night, more died.

Come the morning, those left found themselves beached. The waters had receded, the sea water unseen, leaving all three ships sunk in sodden sand. The survivors went ship to ship, rescuing those they could, leaving those that were beyond help.

The lone captain stood, ankle deep in the wet shore, with the remaining sailors spread out. They looked at the tilted ships, renewed their prayers, and left. The captain was the last to look away but joined the others from behind as they made their ways to a life different than what they had hoped for.

“You know, kiddo. You know. I’m getting tired. You should be, too. Time to turn off the light and get to sleep.”

They followed without a thought. They went without care. Their goal was senseless, and their deaths even more so. The destruction they found were caused by being heedless of the signs, of ignoring anything but their wants. Not needs, their wants. And if they learned anything from any of this hubris-and I’ve already explained hubris to you, twice, tonight, so forget it-it did not show in any of their actions.

So, they were doomed. Doomed to do what they did, to do it again. Maybe in a different way, but still, in the end, they did it again. And again.

“Yes, stupid. Get some sleep, Scotty. Love you.”

“Love you too, Grandpa.

“Don’t do anything stupid. Ok?”

The above comes from a photo prompt posted on Fiction Can Be Fun.

I have mentioned my association with Debs and David (who co-write their blog) before, having met them during the 2018 AtoZ Blog Challenge. You’d do yourself a big favor if you followed them and have the pleasure of enjoying their writing. Their WIP is going through its final stages and I, for one, can’t wait to get my hands on it.

If you want to join in on the writing prompt (and I strongly encourage it), here are the “rules”:

Any style, any genre, just nothing NSFW – otherwise the world is your oyster.
Tell us your tale …

Post your story on your site and link to it here in the comments below, or drop us a line via the contact us page and we’ll post it for you.

PS: if anyone cares, I wrote this while listening to The Essential Leonard Cohen. Who do you listen to while you write?