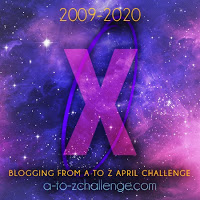 NIGHTMARES FROM AN UNBLEACHED SOUL

X, Y, Z are usually the tough ones on the AtoZ Blog Challenge. X especially. I’m glad I found X-Double-Minus = Extremely poorly done, bad, inferior (said mostly about theatrical or musical performances). I’m including life. Someone famous said, “All the world’s a stage.” I fully believe that.

My theme for this year’s AtoZ Blog Challenge is: Nightmares from an Unbleached Soul. 26 lyrical poems during the month of April (no Sundays). It started on April 1st and ends this Thursday on April 30th. After that, a week or two later you’ll be able to find Reflections on the experience. I hope you found new blogs to like and follow. If you still wish to, go to The Master List.

I’ve asked a few questions along the way: what genre of music you think suits the lyrics best? Who or what style of music was in my head when I wrote these? My last one for the week: