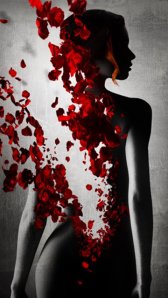 Drinking in the nectar of the kabosu, Red Helen sat and savored the sour orange taste. Chiyoko had chosen the best fruits of the flowering plant, intending to add their citrus flavor to the sashimi once the raw fish had been sliced. She had pricked her finger on one of the sharp thorns, giving tribute to Keikyoku, the Bara Oni. This assured her that the kabosu she picked were the ripest.

Fox was eager to feast on the masu, the Kingfish, that his Kitsune-Mochi had bartered for.  Fox smiled at the memory of that very morning.

Hungry, as always, Fox had persuaded Chiyoko for something other than salmon. Coming to the small fishing village, his Kitsune-Mochi found a fisherman unloading a catch of fresh Sea Trout. Having no money to purchase it, she did as Kamehameha the fisherman had begged, divining that his first two sons were not really his. Fox had laughed and laughed at this, reveling in the sharpness of the fisherman’s intake of breath, and the tears that formed in his eyes. Chiyoko chided him for this behavior as they left the beach.

“He was sad. He loved his wife and children so much, Fox. To find out he was betrayed..aie.”

“Obviously,” Fox said, swishing his tail,”he could not have been so surprised, otherwise why ask at all? Those boys looked nothing like him. His tears were untrue and smelled of self deceit.”

“It is easy to deny what your heart does not want to believe.” Chiyoko stopped walking. “Did you summon Red Helen as I asked?”

Fox smiled and started to groom himself. “Red Helen will meet us at the kabosu plant we passed on the way into the village.”

Red Helen had been true. The Kitsune-Mochi noticed Red Helen forming from the hundred-hundreds of Oni butterflies that surrounded the plant as they approached. Becoming the nude beauty of the Chou Chou Oni.  Chiyoko bowed deeply, the flapping of all those wings creating a current of wind and soft sound. The wind was refreshing. The sound…not so much. It tore into Chiyoko’s mind, sending slivers of thought drifting away faster than she could recapture their moments. Calling on the powers imbued through Fox, Chiyoko righted herself.

“Stop that now!” she commanded of Red Helen. “I am in no mood for your testing me. We have played this out before. Enough.” The sound abated to silence, with only one last cacophonous bleat as the Oni stood fully formed. Fox inwardly was pleased for that last show of defiance. His Kistune-Mochi needed some humbling.

“Chide me, will you?” he thought, and planned.

“Tell me what you want, O powerful Kitsune-Mochi,” the words from Red Helen flew about. “I have other places to be.”

Chiyoko sighed but continued the meal preparation.  “There is a woman in that village-there,” she pointed, “who has been unfaithful, a deceiver and hurtful to the man who loved her. I have seen into his heart, and besides being a simple soul, there is no reason to have been so betrayed. I did not tell him that although she bore two to other men, her legs have parted for many, many more. I answered only of what he asked.”

“Rin, wife of Kamehameha the fisherman.”

The Chou Chou Oni broke apart into a hundred-hundred Swallowtails, it’s white patched wings tinged in red. The sound of flapping died down quickly, leaving Chiyoko to finish the sashimi and serve Fox and herself. They ate in silence, until the many voiced screams came to their ears.

Chiyoko dropped her meal and ran towards the village. Fox did not follow until he finished eating (and devouring his Witch’s portion as well, feeling a truly great meal of Masu should not go to waste). He crested the ridge that slightly hid the village as it wandered down to the sea and sat back on his haunch, taking in the sights before him.

The ground of the small fishing community was littered with the shredded bodies of men and women. 128 in all lay dead, or dying, as Red Helen, en masse, sliced through them, taking in their souls as they died. The red tinged wings became a deeper red.

“No! NO! NONONO!” screamed Chiyoko. The Red Helen laughed a hundred-hundred laughs in response.

The backdrop of crying and anguish surrounded the Kitsune-Mochi as Red Helen formed again, taking a stance too close for Chiyoko’s comfort. Glaring into the witch’s eyes, Red Helen smiled a blood smile.

“Rin was not the only who deceived and hurt in their lust, known or unknown, in this ‘lovely’ little squat. I just saved YOU the trouble of calling upon me again. Thank you for all the delicious souls,” Red Helen bowed her head.

Floating over to stand even closer to Chiyoko, the Chou Chou Oni lowered her voice. “We are done, you and I. Call upon me again, and there will be one soul I will be more than happy to feast on.” With that, an explosion of wings passed around, and Red Helen was gone.

Fox sauntered up to find Chiyoko sitting on the ground. He had passed the fisherman standing amidst what was left of his unfaithful wife and unfaithful friends. Kamehameha was there in body only, hands outstretched in pleading form. Fox chuckled as he saw the empty minded husk. For once, he kept information like this to himself. His Kitsune-Mochi did serve up a truly fine meal, and he was pleased in many ways.

Head bowed, Chiyoko knew Fox approached. “She went too far. She went…too far. Fox,” she said, glaring at him, “we must take action.”

“Against Red Helen? You are madder than normal, witch. I am just one to her hundreds. Forget it. Done is done, and, in truth, you got what you asked for. It just was a larger wish of retribution then you envisioned.”

Chiyoko stood and let the sand on her clothing stay. She stared down at Fox.

“I will not forget this. Done is not done. You say you are one, she is hundreds. You, Fox, are wrong. WE are two, and we are only beginning our journey. Allies await us. Red Helen will regret what she did in my name.” Chiyoko turned away from Fox and went to find the fisherman. She took him by his hand and guided him to his home, where his children, and the ones he brought up as his, waited.

Part One: The Kitsune-Mochi and Tora Baku

Part Two: He Does Not Dream