Aspects of  horror to hear

Words that one refuses oneself

Does not still the malignancy that eats away

Until what is left is nothing.

That can’t be crawled out of.

No one else can listen to that silence

But, the silence widens

If I had everything

I thought I needed

Would I still want?

If the basics were in place

Would there need to be more?

Or, with the needs abated,

Would a new want rear its head,

Taking on a raging, pulsating pull?

I don’t have what I truly need

I really only want what I need

Would things finally be enough?

If I hadn’t wished for a certain freedom

That, when it came, left more locks,

Would I still want that freedom?

Yes, yes yes…but not in the way it came.

This is a twisted knot

Of my own doing 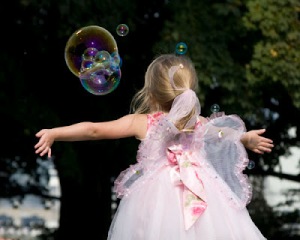 She won’t always be this way

Relish in what she delights in

What she marvels at

What she runs to grasp

Keep this image in your heart

Thursday Flash Fiction Week 28: Innocence and Dream: Please write a poem, a prose, or a short story inspired by the image provided above

I’ve done their prompts before. Hope you enjoy.

Dog and Elephant, with long country nights,
Counted the stars as they wandered away
Into the meadows, into the fields,
Searching for the stardust that comets yield.

“Oh, my friend,”said Dog, “look to the sky,
Another wonderful comet is passing us by;
It’s tail all a glitter, the rays it does glow,
Let’s follow it together, where ever it goes.” 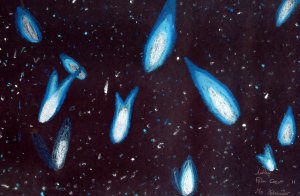 Elephant counted up to eleven
Speeding comets diving through the heavens
She wondered at their leavings
Thinking “Did any have misgivings?” 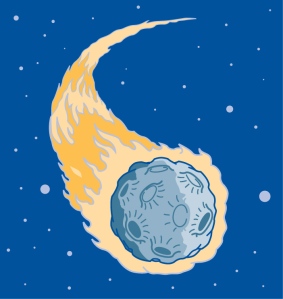 One came around it’s speeding course
And in a fit of complete remorse
Dog turned to Elephant, and did disclaim
“When comets go, nothing is the same.” 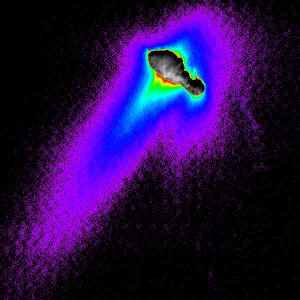 But then a brilliant flash of light
Colored the sky; lit up the night!
A comet had turned itself around
And all it’s details were seen by those on the ground.

The comet burst apart in an astounding array
Taking the breaths of Dog and Elephant away!
The blue burst, the pinprick of light
Filled the night skies; filled their sight.

And settling then, their minds all ablaze
They knew they would talk about this beauty for days.
All night long they’d sit and gaze about
Searching for comets and stardust..until, tired, they gave out.

While I was writing this, I heard EmmyLou Harris in my head singing this, her particular phrasing and voice was a part of this creation, so Thank You EmmyLou.

For those interested in how I create, I saw this work of art at The Bronx Museum.  I was going to be performing there, and I knew one of the things they liked was for the storyteller to find a piece of artwork that spoke to them, to tell in front of. I kept being drawn back to “Female Indian” but had no story to tell…at the time.

The poem just came to me really late at night. I was thinking about the piece: the look she has, the missing hand, the abused nature of her arms, the naked torso. I did my best to capture the feel of what I do know of the plight of Native Americans, as well as the millions of others who have suffered severe oppression and hatred. 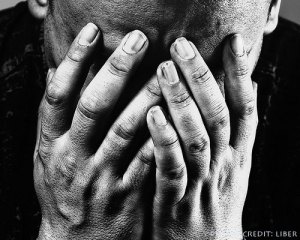 What is the cost of loss?

How does it accumulate?

The feelings of numbness,  the emptiness it brings

The loss of too much, still attached with bone deep strings

The erosion of self

The net worth of pain

Looking in the mirror at a face in disdain

Too much, the weight of pain

Too much, the sorrow of despair

Too  much, the time all alone

Too much, too much…too much…

The cost of loss encompasses all

The accumulation of loss compares to nothing at all

The sliding down feeling of why try at all

Too much, too much…too much…

What is the cost of loss?

Alejandro: thank you for pointing this song in my direction.

Yes, I am looking at from Zero to 57 spanning the month of April 2011. From hating the idea of blogs and such, to finding (1) it makes me write and (2) I find the use in restarting my freelance creative life a plus. I’ll also have two weeks of downtime later in the month (schools on Spring Break), so it’s good for mental health as well.

The reason for 57 above? In the month of April, between this blog (for the writer/ storyteller part of me) and my more Teaching Artist/performance blog BornStoryteller, I will be writing a total of 57 blogs: 26 here (one for each letter of the alphabet) and 31 on BornStoryteller, one for each day of the month. Will I do it? Will I forget and drive myself crazy…well, crazier? May 1st will tell the tale.  Not even sure how I’ll use this yet: just stories; poetry/song lyrics; journaling; true stories; just not really sure what.

Alexandra was one of those that got away, that I long for now, knowing if we really gave it a shot..I would still have no idea how it would have turned out. Got away, ran away, pushed away, never really was in the way? As above, not really sure, now. Infatuated? Definitely. Love, yes, but still never sure how much. Intrigued by and pulled towards and maddened by and longed for and lusted for…yes, yes, yes, yes..and, oh, yes.

One summer night…Alex was off to the wilds of New England to spend a good part of the summer at a camp. Musically gifted, this was her world she was entering, one specifically for those with real talent and passion, of which she had in full. Gone already for a week or two, this young lady I talked to often, saw not as often as liked, was MIA.

Around 11pm, just off an ice cream binge with my friend Sam (who, btw, introduced me to Alexandra..Alex..Ai) and I were leaving the Howard Johnson’s. Bored, awake, and both of us antsy, we decided then and there to get in the car, drive up to the New England camp and find her. Now, this was way before cell phones, GPS, or all that. We had a map, a name, and some money in our pockets. Off we went.

The drive up was uneventful. Sam & I did our usual talking, goofed around, sang badly to the songs on the radio, got lost a few times, but never once did we talk about what we would do when we got to the camp. That discussion came later.

Hours later, we drove into the town that grounded the area the camp was located.  Almost out of gas, we drove around a sleepy, roll-up-the-sidewalk-at-6pm little town, looking for an open gas station. Luck on our side, we found the ONLY place open at 2 something in the morning: a gas station. Filling up, and asking any final directions, we made our way to the camp.

It was an absolutely calm summer night, clear skies, moon shining bright, and not a car on the road except for us. We found the camp, pulled over on the opposite side of the road, got out.. and just stood there. Somewhere, inside one of the shadowed, darkened buildings, under a very starry starry night, was the object of my quest. My Pancho to my Don Quixote said: “So, now what?”

We wound up by the car for quite awhile, talking, looking in silence, and some deep heavy sighing (most, if not all,  from me, I’m pretty sure).  Whatever bravado or knuckleheadedness that drove us out there, it left as we just stood and stared at the camp. The chicken side of me took over completely. We got in the car and drove off south, back to New York.

There were some other adventures that night, but I’ll save them for another blog letter, maybe.

Alexandra came back to NYC, we saw each other here and there, talked a lot on the phone, and I felt drawn to her when we were together over the next few years, and distanced myself at times (there was an age difference that at times became my own built in barrier). I know we had some excellent times together, I know I let her down more than once, and most likely hurt her (for which I am always so sorry about), and I know we had a love/need/want for each other. Well, I know it from my end.

The letter A: Alexandra. Alex. Ai.

Sunday, March 20th, 2011, was our first event for World Storytelling Day. It was unequivocally a success. I owe a lot of that to Sr St John Delany, the five other tellers who joined me (Jonathan Kruk, Melissa Chernowetz, Katie Issel Pitre, Bernie Libster & Ron Sopyla), and our wonderful audience. This was a day of storytelling sharing at it’s finest.

On May 1st, you will be able to read all about how an event happened, from start to finish in 25 days, by visiting Eric Wolf’s The Art of Storytelling Blog. It was a great experience and one we are sure to revisit again.  Please keep an eye out for it, and follow Eric’s link and become a fan. There is a wealth of information on it for anyone who loves a good story.

Founded in the early ’90s in Sweden, World Storytelling Day has truly become a global event.  Originally more of a celebratory day of Swedish tellers, it has grown to an organization that embraces and entwines the world’s storytellers together.

I am proud to be telling at this event on the PACE University,  White Plains, NY campus, with some amazing people: Jonathan Kruk; Melissa Chernowetz; Ron Sopyla; Katie Issel Pitre; and Bernie Libster.

Come be part of a global experience!