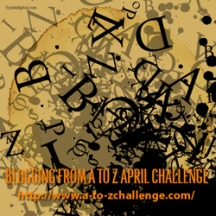 Welcome to the A to Z Challenge : 26 Stories during the month of April

The inhabitants of Swan Rise Apartments carried the weight of their lives with them. Some  soared in moments of true elation, ecstasy, flights of fancy, but otherwise they were grounded through the daily realities. Others rarely ever rose above a situation. They’d trod through the days, milling around and about and passing by all the other tenants. The building was a center of gravity, keeping them in place from 1960 to 2005.

No…not all of them.

As the children grew, their universe expanded. As it expanded, they moved faster and faster away, seeking to fly off on their own and leave the parental orbit they’ve circled around. Eventually they acquired their own gravity force and rarely returned; too many seemed to have anti-gravity packs on them, with a time limit attached that says “Stay and hold back on  your life,  or move on.”

Then there are the divorces, those that stay after the dissolution of vows, those that leave. How many hearts can be broken in forty-five years? Until an explosion sent all the residents adrift in space, many homes lost their centers, the things that brought them together, holding them in place. Their collective dissolved, and the energy used to keep them in place was exhausted.

A growing number seemed to just be passing by. They settled for a short stay and left little to no trace of their moving on. This happened more and more as the years passed; the attraction and hold of the building fading, flinging out the new, holding onto the old.

Many did grow old in Swan Rise. Many left in the way most don’t like to talk about.

So many, as the years passed by; tiny notices by the mail boxes, relating in only a few words the release of another from the grounds. With the eventual removal of that paper on the wall, the last tie was severed for many. When the Whistler died, and then soon after his wife, there was a hollow wind passing through the ground floor that many felt. Others were more fleeting. The one murder in the building held for a long time through the whispers, fears, and for one, relief.

Gone, the husbands and wives, mothers and fathers, grandparent, a number who lived a life alone, pets…so many pets. All those no longer earth bound.

Miraculously, no child died in the living history of Swan Rise. That grief was spared, until the explosion.

The foundation kept the building secure in place; the bricks, wood, plaster, glass, metals, ceramics gave it heft to hug the world it became for the many. Carpets and flooring were laid, furnishings and decor placed, and residents made their apartment a home. It had a mass that attracted them, mutually intense.

The building kept its own gravity, until parts of it were hurled away in a horrible blast and brought down to Earth by a greater force.